Reflections in Blue
May 2021 Reviews

Blues Blues from the UK
May 2021 Reviews 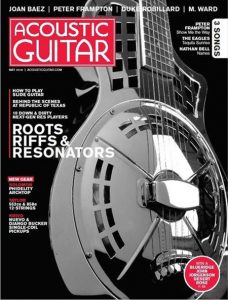 Acoustic Guitar Magazine featured donna in their May 2016 issue of the top 10 new generation “up and coming resonator players” in the story “Down and Dirty: 10 contemporary resonator players talk about their love for that nasty sound,” by Mark Kemp. 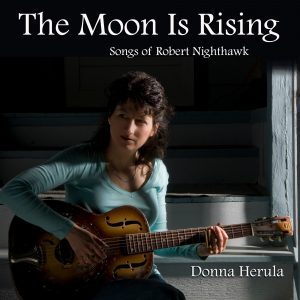 Like one of her major influences, Rory Block, Donna Herula has dedicated her second CD to one of the acknowledged masters of the blues – Block having honoured Mississippi Fred McDowell, Son House and Robert Johnson whilst Herula pays tribute to slide guitar maestro Robert Nighthawk.

Herula chooses her tracks to reflect Nighthawk’s full musical legacy – culling them from Bluebird and Decca when he was simply known as Robert Lee McCoy through his highly influential United Records recordings and on to Chicago and Chess.

Herula has a powerful blues voice that still retains the wistfulness necessary to carry Nighthawk’s songs, but permeating it with a trace of menace.  She doesn’t try to copy Nighthawk’s slide style but still retains his characteristically earthy beauty, unique phrasing and wistfulness of tone, ensuring that this set is a fine tribute to a wonderful and influential artist, but most importantly is imbued with her own talents and reflects her own personality.

Herula opens with “Take It Easy Baby”, her evocative slide complemented by Jochem’s warbling harp, and it has to be said that each track on which Jochem appears is imbued with a distinctive Nighthawk inspired ChiTown feel – the classic “Bricks In My Pillow” particularly benefiting from this approach as harp and slide intertwine evocatively.

“The Moon Is Rising” is permeated with a sense of menace which is complemented by the addition of melancholy electric violin – “Crying Won’t Help You” and “Gonna Move To Kansas City” are the nearest Herula comes to pure Nighthawk – whilst “Friar’s Point” is updated from it’s Bluebird origins and given a United Records styled reading.

This is the first time I have heard Donna Herula and I have to say I am highly impressed by her work, and fervently hope this tribute will bring more attention to the work of Nghthawk – and – I would love to hear her perform a similar tribute to another great “slide-meister”, Johnny Littlejohn.